The lifestyle at La Paloma

Living in La Paloma means getting an environment conducive to relaxation and social activities. Waking up every morning to the Florida sun and heat in a neatly maintained park and where all services are included, provides the residents with peace of mind that turns into a health benefit.

Socialization, sport, leisure and rest are just as synonymous with a busy day at La Paloma. The community has the well-being of the park's population at heart and ensures privacy is protected from each and every one with the warmest respect. 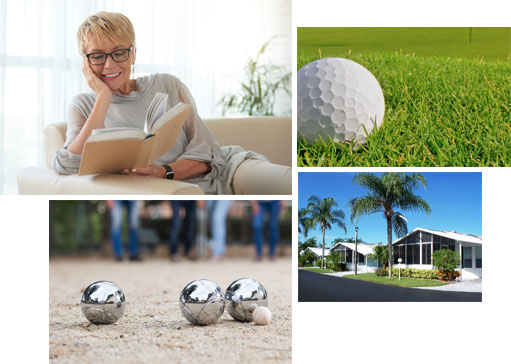 At La Paloma we have the well-being of our residents at heart and we do everything possible to make every stay memorable.

Offer all our residents an incomparable quality of life

Becoming the most coveted park in Palm Beach County

La Paloma was founded in 1985 by a Californian Company. The Spanish influence is noticeable which definitely marked the founders, as much in the style of the Club House as in the choice of the name given to the community; the Spanish name La Paloma means The Dove in English.

Financial difficulties plagued these promoters, and the project was abandoned for a period of five years. There were only about ten homes in the park at that time.

It is around the year 1990 that a group of Quebecers took over, with a lot of enthusiasm, this project, with the result that four years later, La Paloma had about 200 homes, occupied for the most part by Quebecers.

In 1993, a spectacular turn of events: the promoters announced that the park will be sold to an American company for a "price of more than 7 million dollars". Anxiety is hitting everyone, what will become of the monthly rent prices? How will the new owners manage the park? All these questions raised the level of anxiety among the homeowners, tension was high.

At the time, a group of six or seven homeowners were toying with the idea of acquiring the park and maintain the quality of services and reasonable rent prices. They began working with as many homeowners as possible to try and convince them that this project was feasible. With the support of about one hundred homeowners, they find themselves in a legal battle that many foresee to end in failure.

Against all odds, the court is favorable to them, but the battle is not over yet. They must now find the financing, predict correctly the financial structure needed; in order to protect the investors, consult with the lawyers, accountants and tax department to make sure everything is in accordance with the American as well as the Canadian laws.

Finally, on November 1st 1994, La Paloma Partners Association becomes the rightful owner of the most beautiful park in Florida for the price of 6.125 million dollars of which more than three million was paid cash.

The mission of the directors of La Paloma on that memorable day was and still is to this day; to offer all residents an exceptional quality of life, at a reasonable price, by supplying adequate equipment and services, while protecting the value of the homes and giving the partners a good return on their investment.